The World of Work – Have We Got It All Wrong? 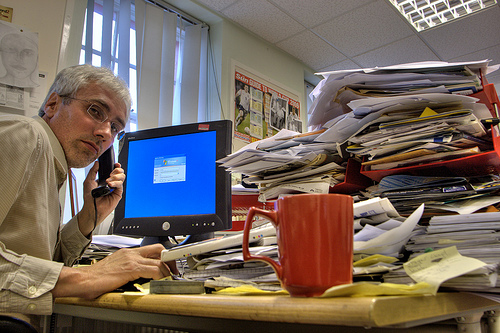 We spend most of our time at work, so it goes without saying that we should enjoy what we do. The sad reality is that most people don’t enjoy their work. The logical conclusion to that suggests most of us spend a large portion of our lives doing what we don’t want to do. Chronic, long working hours can have a major impact on mental and physical health because people’s resources are drained and not adequately replenished by rest.

According to research, British men have the longest working week in Europe-47 hours, and British women work 43 hours. A third of fathers of young children in Britain admit to working more than 50 hours a week. The average man in the US spends just 25 minutes a week with his kids, yet American fathers place their children at the top of their list of priorities.

In his bestseller, “The man who mistook his life for a job”, Jonathon Lazear, a successful New York literary agent, argues that people who work to excess are just as guilty of social delinquency as the deadbeats who don’t work at all. The number of clients who have come to see me due to relationship issues with current partners is staggering. Most of these clients struggle due to a lack of connection with their parents. Many feel abandoned and as a result, their attachment styles are damaged. Children who grow up feeling neglected tend to end up with anxious adult attachment styles instead of stable attachment styles. This insecurity can play out over a person’s entire life.

Where did the notion of work as the central focus of life come from?

The ancient Greeks saw work as a tragedy. In fact, for most of history, paid work has been sniffed at by anyone with the rank or intelligence to avoid it. Only in the 16th century did the Calvinists begin to talk up the notion of a “work ethic”, which was held to be both pleasing to the Almighty and improving development for mankind.

The most ‘overworked’ city:

In 21st century Japan, they have a new law called “Karoshiin” (from the term: Karoshi), which means that if you die of overwork, your boss goes to jail! The Japanese are among the hardest workers in the world.

Here’s an eye-opening example: In July 2013, 31-year-old Miwa Sado, a reporter for Japan’s national broadcaster NHK, was found dead in her Tokyo apartment. She had died from heart failure. It was later revealed that Sado had logged 159 hours and 37 minutes of overtime at work in the month before her death. Sado’s death was officially designated as a “death from overwork”. According to recent studies, Japan was deemed to be the hardest-working city in the world, but despite being notorious for long working hours, cities in Japan have relatively low productivity levels.

According to recent OECD data, Japan is the least productive country in the G7; the US is roughly 59% more productive. This is despite the fact that Tokyo residents work an average of 42 hours a week and have the earliest start time of all cities at 8:57 am.

The Swiss bank, UBS conducted their own research and found that Mumbai was the hardest working city, clocking up the longest average working hours of 3,315 per year per worker. But as with the case of Japan and other cities, working long hours does not necessarily equate to high productivity.

Not only do we work crazy long hours as adults, but we also expect our children to adopt this way of life. Children, like adults, are expected to be actively pursuing something for most of their waking hours. Children often feel under pressure because their parents over-schedule their lives, enrolling them for countless activities such as French, German, computer courses, and music lessons. Children are missing a lot of things we would associate with a normal childhood, such as being bored and messing around in the garden doing nothing.

This is where creativity comes from as well as the skills to manage a busy mind (when doing less) and enjoy life in the moment. Children these days cannot self-soothe (they aren’t being taught how to do this) and seek out achievement as a way to achieve this. Many children are conditioned to believe that achievement brings with it a sense of self-worth and happiness. This concept is back-to-front and causing excessive anxiety and depression in young people( especially teenagers and young people in their twenties).

Last year the children’s charity, ChildLine, received 783 calls about exam stress from under 16’s. One in seven was aged under 13. At the same time, the UK government has introduced early learning goals for children as young as three and this generation of school children are the most tested ever. From a psychologist’s point of view it would seem that the more unhappy and dissatisfied we are, the more we want our kids to excel and do better than us. This clearly isn’t the way to go about achieving this aim.

Most people who work long hours tend to be unfocused, putting far more effort into things than is necessary. Perspiration spells pressure. Never forget that there is only one of you yet the company you work for will continue after you’re gone. Keep your effort in perspective. Trying too hard never works. Companies play on people’s insecurities and foster a mindset that encourages working overtime and sacrificing personal time. Believe in yourself and do not let your company exploit your need to do your best and then put in extra on top of that.

Work has become a great excuse for almost everything else. I can’t have a social life because I have to work or I know that my marriage is in trouble but this work project needs to be delivered on time. Talk about skewed priorities-what the heck is going on here? Perhaps the Covid-19 lockdown is a blessing in disguise? Reduced working hours during lockdown has shown clear evidence of how less travelling and working from home is good for the natural environment. I’m liking the sound of reduced working hours more and more.

Reducing the length of the working week has been proven to boost productivity and efficiency. In Japan, Microsoft trialled a four-day week and productivity increased by around 40%. An organisation in Melbourne found a six-hour working day forced employees to eliminate unproductive activities, such as sending pointless emails, sitting in lengthy meetings, and randomly surfing social media sites on the internet. British businesses that have successfully implemented a four day week include Elektra Lighting, Think Productive and Portcullis Legals.

How can a better work-life balance be established?

Don’t buy into the ridiculous notion that there is something wrong with you if you don’t fit the 9-5 mould. Sacrificing your main priorities and values will absolutely lead to a miserable existence. Downgrading your family, friends, and free time to pursue your passion will most likely result in many regrets when you look back over your life one day. Money is a means to an end – what is it that money can bring to your life? Is there any other way to achieve these goals that don’t involve working yourself to death? Think outside the box and read books on how to live and work more flexibly. One that I recommend is called “The Four Hour Work Week” by Tim Ferris. It offers ideas on how to break away from the traditional world of work. Thankfully, changes are now starting to happen since the Corona Virus pandemic with more people working from home. Subtle shifts are taking place that encourages the emergence of a more flexible working population.

Switching off from work (physically and mentally) is essential to ensure mental and physical health and a happy and fulfilling personal life. Plan holidays and short breaks through the year in advance; use mindfulness to help you switch off; practice self-compassion and prioritise self-care.

Ever since taking my Sociology Degree and my studies on Karl Marx, I have always wanted to escape the traditional world of work where the minority owns the means to production and the majority only have their labour power to offer. Capitalism has a lot to answer for when you consider all the greed and corruption that abounds. The higher powers want us to be good, well-behaved citizens who work long hours and pay our taxes. This is despite evidence that suggests working fewer hours can have a positive impact on productivity levels. Overwork continues to plague many cities but perhaps when we all shift our mindsets, real positive changes will emerge leaving us a happier and more fulfilled society.