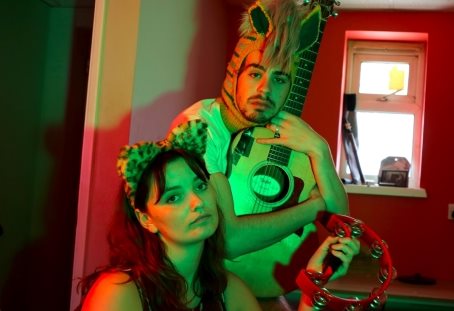 Tritone Theatre’s founding duo, Calum Sivyer and Rosanna Adams, premiere their debut gig theatre play, The Greatest Hits of Lily and John, at the Edinburgh Fringe Festival this year. A rehoused VAULT 2022 show that sold out previews at The Other Palace, London in March this year, the play was also a recipient of the Pleasance Debut Fund grant 2022. The show explores the sprawling topic of mental health through scripted dialogue, live original music, movement and comic absurdity. And the two dress in animal costumes to safely steer the characters through anxiety attacks and suicidal thoughts.

Calling the overthinkers and underachievers, the catastrophisers and the never-time buyers – the broken hearted, the bored, and the ones who’ve seen it all before…

Lily hasn’t heard from John in weeks. His depression has spiralled and he’s recording a final goodbye. When Lily bursts in uninvited, he panics, lies, and says he’s writing a play. A play with live music about…a dressage horse. Committing to the weird and wonderful, they enact the ‘horseplay,’ colouring the stage with their fears, phobias and failures.

A bitterly honest and tenderly ridiculous account of modern life and love, the show explores mental health issues prevalent among young people today. Focussing on a young man’s experience of depression, the all-too-common struggle to reach out for help, and the consequent emotional labour that the women in their lives can feel obliged to undertake to get them talking. Using scripted playback theatre techniques, the play discusses themes surrounding and leading to suicide, the highest cause of death among men under 45 who are less likely to ask for help or to express depressive and suicidal feelings.

Rosanna and Calum describe it as ‘a love letter to our generation’ and they say; ‘We are living in a time in which young people are experiencing the heightened pressures of fewer job opportunities; lack of access to affordable mental health care; inequality; misogyny and social struggles, all against a backdrop of a global pandemic, climate crisis and soaring costs of living. We have drawn on our own struggles to write this play and passionately believe in the need to support other people, especially our peers – young adults – in their quest to understand and forgive themselves and ultimately feel less alone.’

The production is partnered by 2 important charities – The Listening Place, which offers free, confidential and ongoing face-to-face listening, by appointment, to people who feel that life is no longer worth living – and HiS Charity, which supports men by helping them to help themselves through holistic therapies and events, thereby hoping to prevent suicide.

Written and performed by Rosanna Adams (RSC’s The Mirror and the Light) and Calum Sivyer (Windmill Theatre’s Cabaret).

Cast: Rosanna Adams as Lily and Calum Sivyer as John

Movement Directed by: Jodie May Sully

Listing: ‘The Greatest Hits of Lily and John’ by Calum Sivyer and Rosanna Adams,

About Tritone Theatre: Formed whilst training together at the Oxford School of Drama in 2020. Tritone Theatre blends folk music with modern theatre. We aim to tell authentic stories about people struggling to be themselves in our ever more uncertain world, and through music, humour and movement we aim to embrace the absurdity of the human experience. We bring personal folklores and taboo subjects to life, in the hope that we leave our audiences feeling less alone.