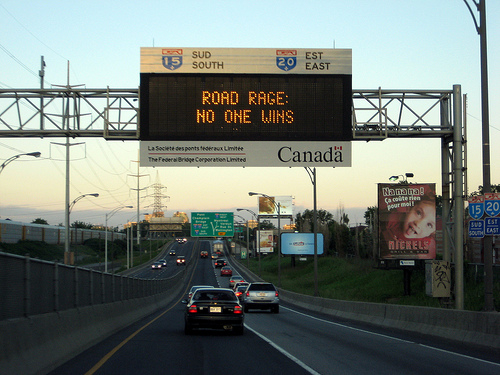 This subject has been one I have wanted to blog on for a while and seeing as I was a victim of road rage today, I thought it might be time to write something about it. Road rage is aggressive or angry behaviour by a driver of an automobile or other road vehicle. Such behaviour might include rude gestures, verbal insults, deliberately driving in an unsafe or threatening manner, or making threats.

In the UK, road rage can result in criminal penalties for assault or more serious offences against the person. The Public Order Act 1986 can also apply to road rage. Sections 4A and 5 of the 1986 Act prohibit public acts likely to cause harassment, alarm or distress.

I was on my way to school to fetch my son and pulled up behind a parked car to let a car coming in the opposite direction pass through as there was only enough  space for one car to pass.. Suddenly, a white van overtook my car and the parked car and slipped in before the vehicle had a chance to move forward. The driver of the van then put his left indicator on to turn into a small road just ahead. After the vehicle on the opposite side had driven past, I advanced forward and hooted at the van driver for dangerous overtaking and for not waiting behind me.

In a flash, the van driver turned off his indicator and changed his direction,  following my car down the road. He continued to hoot, flash his lights and tailgated me getting dangerously close. I was surprised at his over reaction and stopped my car to get out and ask him what the problem was. The irony is that the moment I tried to confront him face to face, he swung the van into reverse. Seems he didn’t have the guts to talk to me. I returned to my car and he then drove right up to the rear of my car again, hooting and showing me his middle finger.

What a wimp! It amazes me how people can come across all aggressive and full of it when they actually can’t handle face to face conduct. It seems many people seem to think they are invincible when they are in their cars.

I took his registration number down and reported him to the police. After collecting my son from school, I saw the same man delivering a package to a local resident. The moment he saw my car he took off in his van as fast as he could.

I guess it wasn’t the best idea to confront this guy as he could have been a raging psychopath. There are many people ‘on edge’ driving around and you never know who you might end up in an altercation with. I would recommend laughing aggressive types off. In hindsight, I wish I had just smiled and waved at him. That’s often all that is needed to annoy someone even more.

I am living and learning every day. It’s time to chill out and do my best to avoid the mad drivers in Surrey. They are not worth getting all het up over.