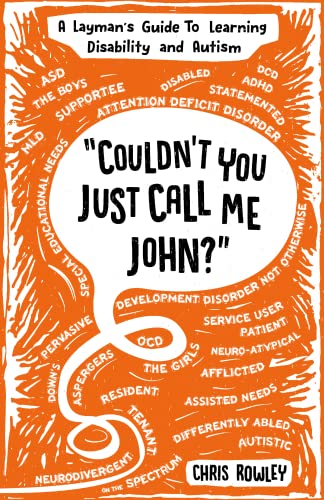 When social and cultural historian, Chris Rowley, started researching the world of those living with autism and learning disabilities, he was taken aback by the number of often highly offensive descriptions of these people.

He listened to over 300 people, some in the NHS, social services and education but mostly those living with the disabilities

‘Virtually every one of them told me that no-one understands them or what their daily life was like,’ said Chris.

He made a list of the words and phrases used to describe people with autism and many of them made unpleasant reading.

‘Some of the worst included ‘retard’ or ‘lunatic’ although the kinder expressions included ‘differently able’ or the slightly colder ‘service user’. It was discouraging, to say the least, Chris added.

The title of his book, “Couldn’t You Just Call Me John?”: A Layman’s Guide To Learning Disability and Autism’ , came about after he asked a man with autism how he would wish to be described, and that was his answer.

‘Consciously or unconsciously this man was asking to be treated as an individual.’

The book is being launched during World Autism Acceptance Week which runs from March 28th to April 3rd. Pioneered by the National Autistic Society (NAS), it aims to draw attention to the 700,000 people living with autism in the UK both to educate those unaware of the condition, and to help make the world friendlier to those who are affected by it.

‘The aim of my work is to explain the changes and today’s situation through my journey of talking to all these people. I have looked in depth how they are helped, educated, cared for and housed in the twenty-first century.’

The book constructs a clear and detailed picture of the sometimes fraught but often uplifting relationships between families, local authorities, schools, medical centres, care workers and those who have the need for the services provided.

Mark Walker, Director for Special Educational Needs and Disabilities for Kent County Council, said: ‘This book shines a light on a hidden history, it shares stories about real lives that would otherwise never have been told.’

Dame Stephanie Shirley CH, Philanthropist and Founder of the research charity, Autistica, said the book is ‘hugely informative in evoking the character and atmosphere of various services available for those with learning disabilities, autism or special educational needs. I enthusiastically recommend it.’

Dame Kelly Holmes, Olympic gold medalist, worked in a hospital for men and women with learning disabilities as a teenager. ‘This book is about how people like those I knew are treated today. A hugely important subject and the so-called ‘normal’ world should understand these lovely people better.’

The individual stories are personally told within ‘Couldn’t You Just Call Me John’ and give a sympathetic counterpoint to the interviews and experiences provided by the specialists, carers and administrators.

Sir Richard Stilgoe, musician and Founder of The Orpheus Centre, which supports those with learning disabilities who wish to make music, is a strong supporter of Chris’s writing and research.

‘There have been great steps forward. I never met a disabled person in my youth because they were kept in special places,’

He added that, now, things are different. ‘My grandchildren are all at schools with almost the whole range of abilities. All sorts of discrimination are alien to them because they are, in their eyes, irrelevant.’

Chris continued that all the people he interviewed with learning difficulties were unique.

‘They needed to be understood better. They nearly all felt frustrated by their inability to fit in with society better.’

When he asked a director at his local Kent County Council what was most needed to support these people, she didn’t believe money was the answer.

‘Money is important of course but what is most needed is a better understanding from the public.’

‘Couldn’t You Just Call Me John’ aims to provide that understanding through honest and detailed accounts of individuals who are most familiar with the system and the way they are treated by ‘ordinary’ people.

‘I had begun to understand a little about the wide variety of people who had what came to be called learning disabilities. However, when I began to look into the situation today, I soon realised the even wider complexities.’

This latest book is a non-expert discovery of this world with a serious ambition to generate understanding within the general public.

In the foreword Michael Bowers, a former publisher, said that what emerges is that the problems associated with many forms of learning disabilities are being tackled by highly qualified and sympathetic professionals often against a background of inadequate funding and unhelpful policy changes.

‘Nevertheless, as Chris Rowley skilfully highlights, going the extra mile is the norm and not the exception. There is scope for optimism.’

‘Couldn’t You Just Call Me John’ is available from Amazon at £11.99