How To Regret-Proof Your Life 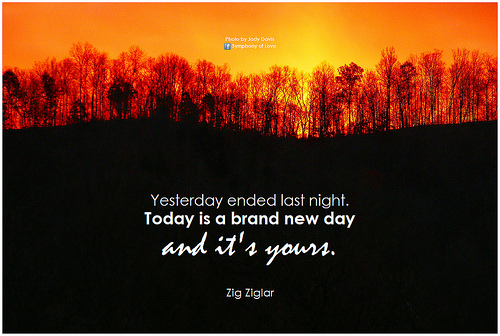 How To Regret-Proof Your Life

This made me laugh even though there is a certain amount of forehead-slapping hindsight which often brings regret:

After a lifetime of handcopying ancient texts, an elderly monk became abbot of his monastery. Realizing that for centuries his order had been making copies of copies, he decided to examine some of the monastery’s original documents. Days later, the other monks found him in the cellar, weeping over a crumbling manuscript and moaning, “It says ‘celebrate,’ not ‘celibate!'”

If you are thinking, “That shouldn’t have happened or I shouldn’t have done that,” you’re locked in a struggle against reality. Many people pour years of energy into useless “shouldn’t haves.” The angry, resentful ones endlessly repeat that their ex-spouses shouldn’t have left them, their parents shouldn’t have overfed them or neglected them, or their bosses shouldn’t have made them buy flowers and do menial jobs as it wasn’t part of their job description. Even drearier are the sad ones, who forever drone some version of “If only.” If only they’d married Sebastian, or gotten that promotion, or heeded the label’s advice not to operate heavy machinery, they would be happy campers instead of les misérables.I call this unproductive regret. People use it to avoid scary or difficult action; instead of telling the story of the past in a useful way, they use it as their excuse for staying wretched and staying a victim. If you’re prone to unproductive regret, remember this: Everyone agrees with you. That thing you regret? It really, really, really shouldn’t have happened. But. It. Did. If you enjoy being miserable, by all means, continue to rail against this fact. If you’d rather be happy, prune the “shouldn’t haves” from your mental story, and move on to…

Of the four basic emotions—sad, mad, glad, and scared—regret is a mixture of the first two. Your particular situation may involve enormous sadness and a little anger (“My father died before I ever met him. Damn cruel fate!”) or enormous anger with a side of sadness (“Why, why, why did I get a haircut from a stylist who was actively smoking a bong?”). Whatever the proportions, some regretters feel sadness but resist feeling anger; others acknowledge outrage but not sorrow. Denying either component will get you stuck in bitter, unproductive regret.Considering anger and sadness separately makes both more useful. Right now, think of something you regret. With that something in mind, finish this sentence: “I’m sad that __________.” Repeat until you run out of sad things related to that particular regret. For example, if your regret is contracting Lyme disease, you might say, “I’m sad that I feel awful.” “I’m sad I can no longer ride my pogo stick.” “I’m sad that the woods don’t feel safe to me anymore.”When you’ve fully itemized your sadness, make another list, beginning each sentence with the phrase, “I’m angry at ________.” For example, “I’m angry at my body for being sick.” “I’m angry at God for creating ticks.” “I’m angry at the entire town of Lyme, Connecticut, for which this $#@* disease was named.” Write down all the causes for your rage, even if they’re irrational.Once you have a clear list of your sorrows and outrages, you can move on to step 3, where you’ll work both angles to transform unproductive regret into the productive kind. This is extraordinarily useful but also profoundly uncomfortable because the only way out of painful emotion is through.

3. Grieve What is Irrevocably Lost

Sorrow is a natural reaction to losing anything significant: a dream, a possession, an opportunity. Productive grief passes through you in waves, which feel horrific, but which steadily erode your sadness. The crushing mountain of sorrow eventually becomes a boulder on your back, then a rock in your pocket, then a pebble in your shoe, then nothing at all—not because circumstances change but because you become strong enough to handle reality with ease.You’re finished grieving when you see someone gaining what you regret losing and feel only joy for them—maybe even secret gratitude that circumstances forced you to enlarge your own capacity for joy (this is how I feel about people who don’t have a kid with Down syndrome). If your sadness stops evaporating, if a certain amount of it just isn’t budging, simply grieving may not be enough. Regret is telling you to seek out a part of whatever you’ve lost.

4. Reclaim the Essence of Your Dreams

You can’t change the fact that you binged your way up to 300 pounds, or lost a winning lottery ticket, or spent decades in celibacy rather than celebration. But you can reclaim the essential experiences you missed: loving your own healthy body, enjoying abundance, feeling glorious passion. In this moment, resolve that you’ll find ways to reclaim the essence of anything you can’t stop grieving.Jenny’s big regret was that one disastrous gymnastics meet had tanked her chances to make the Olympic team. When asked what she would’ve gotten from the Olympics, she said, “Pride, excitement, world-class competition, attention.” Once she’d articulated these essentials, Jenny found herself gravitating toward a job in television, which provided all of them. Now, she says, her life is so exciting that she virtually never thinks about the Olympics. Instead of sidelining her, regret became just one more springboard.I’ve been coaching long enough to brazenly promise that if you decide to reclaim the essence of anything you regret losing, you’ll find it—often sooner than you think, in ways you would never have expected.

The anger component of regret is every bit as important and useful as your sadness. Anger is a bear, but if you pay attention, you’ll hear it roaring useful instructions about how you should steer your future. Don’t fear it, run from it, tranquilize it, try to kill it. Just leave the kids with a sitter, team up with a sympathetic friend, spouse, therapist, or journal, and let your angry animal self bellow its messages. There will be a lot of meaningless sound and fury, but there will also be information about exactly what needs to change in your present and future so that you’ll stop suffering from old regrets and create new ones. Basically, your anger will roar out this next instruction…

I wondered if it’s literally true that “You can’t regret what you did for love.”  I recalled all my significant regrets, and sure enough, I found that none of them followed a choice based purely on love. All were the consequence of fear-based decisions. In the cases where my motivations were a mix of love and fear, it was always the fear-based component that left me fretful and regretful.For example, I’ll be up most of tonight, having spent the daylight hours eating pudding in reaction to writer’s block, which is a species of fear. I predict that tomorrow I’ll regret this—I’ve spent many, many sleepless nights fearing this or that, and no good ever came of it. But I’ve also lost a lot of sleep for love.  And I really can’t regret any choice that brought me one moment of love. Do your own thought experiment, and I suspect you’ll come to similar conclusions. So the ultimate lesson of regret, the one that will help guide you into a rich and satisfying future, is this:

Every time life brings you to a crossroads, from the tiniest to the most immense, go toward love, not away from fear.

Think of every choice in terms of “What would thrill and delight me?” rather than “What will keep my fear—or the events, people, and things I fear—at bay?”Sometimes the choice will be utterly clear. Love steers you forward, and no fear arises. But on many occasions, things will seem trickier. The path toward what you love may be fraught with uneasiness, anxiety, outright terror. The homeless dog looking for a new home will tug at your heart, but worry about upkeep will push away the first sparks of love and leave you without a four-footed friend. You’ll long for success but dread the risks necessary to earn it. Your impulse to champion the oppressed might compete with panic for your own sorry hide.That’s when you can call on regret—not as a burden that you still have to bear but as a motivator that can forcefully remind you not to make choices that will feel awful in retrospect. If you’ve grieved your losses, reclaimed your dreams, and articulated your anger, regret will have made you the right kind of tough-and-tender: dauntless of spirit, soft of heart, convinced by experience that nothing based on fear—but everything based on love—is worth doing.

Living this way doesn’t guarantee an easy life; in fact, it will probably take you on a wondrously wild ride. But I promise, you won’t regret it.

Photo by symphony of love