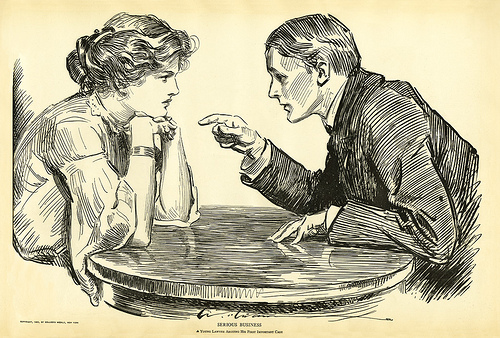 Relationships are rarely constantly equal as they progress. At times, one person will seem stronger and more in control than the other and this can change further down the line. What causes power struggles and what can be done to maintain as much equality as possible?

From what I have seen when dealing with couples, it is the person who tries to control and be assertive and remind everyone that they make the rules that is the insecure one in the relationship.  Those who lack confidence believe that they have limited effect on others and doubt their ability to be in control. This is why they behave aggressively and make rules for others to follow. This is how they try to assert their authority and feel powerful.

The struggle usually starts in childhood. Powerful, unwielding parents can create feelings of powerlessness in their children. These children then find ways to compensate for this feeling of powerless but go about it in ways that are often unproductive and anti social. These children often come from emotional chaos where they were unable to express themselves in a safe and balanced environment. As a result they do not learn to essential skills of being assertive and getting their needs met in mature effective ways. From childhood through adulthood, their sense of power is partly shaped by recognizing that they can alter the mood of those around them, this encourages subtle emotional manipulation – something they have learned a survival tool as a child but that no longer works as an adult in adult relationships. To prove his or her power, this tyrannical adult may overpower the relationship’s emotional energy.

Now, imagine your relationship as a see-saw. If both partners understand their power (or are empowered), the see-saw stays relatively level and balanced. But if one person in the relationship has brought in a feeling of powerlessness, he or she may try to  compensate by baring down on the see-saw, shifting his or her weight, and perpetually uprooting, destablilizing, ungrounding his or her partner on the other side. At best, the partner will be perplexed but willing to go along with these demonstrations of power. Just know that the longer you go without recognizing you’re a force and continuing to be an emotional dictator, the more likely your partner will be to retreat. Ultimately, this manifestation of your attempt to feel powerful will be to drive your partner away.

Give up the power struggle by realising that you are no longer that powerless child and that there are very different dynamics in existence in an adult relationship is the first step. Understand that your partner is with you because they choose to be and that there is no need to try manipulate and control them in order to get them to do what you want. You are equal adults now and all that is needed is effective communication. Learn how to express yourself in positive ways that allow your partner to listen to you rather than to tune you out.