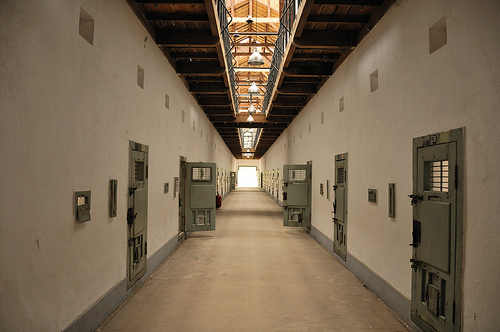 The imprisonment of Oscar Pistorius recently got me thinking about incarceration and the question emerged- is prison effective? I have worked in a high security prison as well as medium secure prisons where I dealt with prisoners and gained useful insights. I also worked for the probation service, dealing with individuals who were spared prison and were, instead, forced to participate in community orders.

Prison is like the plaster that tries to heal the wound. It is a strategy that is often too little, too late. Instead of applying the plaster, society as a whole should be trying to promote emotional well being and happy secure childhoods. This would lead to less crime and less imprisonment.

Simon Jenkins wrote an interesting article on why prison is ineffective. (Please see below for the link to this article). He stated that prison is a waste of tax payers money and in some ways I agree. By the time many people arrive in prison they are psychologically damaged. Many have adopted dysfunctional ways of thinking and viewing the world and this is partly what has contributed to their criminal behaviour. I can’t think of one imprisoned individual who had experienced a loving, stable upbringing. Invariably there had been neglectful parents, abandonment or abuse on some level.

For those individuals, such as Oscar Pistorius, who are high functioning and successful before entering prison,  the psychological impact of having to spend time in prison is huge. It isn’t necessarily about the quantity of nights in prison, but rather the horrific realisation that prison is now a reality that offers the most impact. Without any time in prison, Oscar Pistorius may very well have kept up his defensive thinking that what he did wasn’t that bad. This type of self preservation thinking is part of what made him such a success prior to killing his girlfriend, Reeva Steenkamp. Oscar Pistorius was more than likely able to filter out negativity and buy into his own ‘self hype’.

For individuals who weren’t high functioning and successful prior to prison, the effects of prison are less effective. Prison institutionalises people and renders them less able to function in society -they get out of practise. I saw many individuals arrive and deteriorate after a few months. they would put on weight (often a side effect of medication they were on if there were mental health issues involved) and detach from life, quickly adapting to sedentary prison life.

Prison has become a general “fix it all” for criminals and there needs to be more in-depth assessment as to whether a person is suitable for rehabilitation. Those with disordered thinking will need different treatment to those who are delusional or acting out of a drug/alcohol induced stupor.

In my experience, individuals over the age of 19-20 are much harder to rehabilitate. The ‘prison plaster’ seems to be the only feasible strategy right now. It’s definitely not the best strategy but there doesn’t appear to be resources for an alternative.

Prison – deals with the consequences of a lengthy build up of trouble and an inability to cope with life, and often, many warning signs of trouble to come are ignored. There aren’t enough resources to deal with trauma and abusive upbringings and prison is used as the ‘catch-all net’ to deal with societal fallout.

Dealing with parents, schools, community support etc would help to reduce crime. We need to start earlier – prison is last resort and proof of a society that isn’t supportive.

Prison could be avoided by so many if parents attended parenting classes and if teachers were educated in psychological development as well as academic development. There’s a long way to go but hopefully, as a society, we are moving towards enlightenment. Is prison effective? It keeps us safe from violent people but it does very little to rehabilitate prisoners.