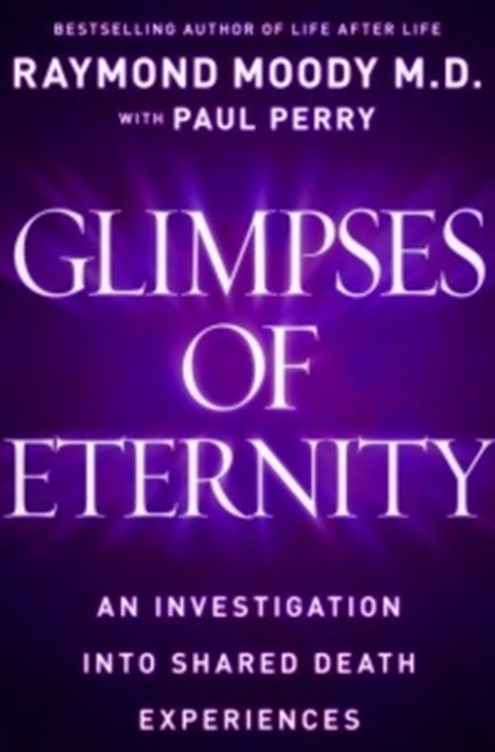 GLIMPSES OF ETERNITY is the first book to explore shared death experiences, this common but mysterious experience of family and friends sharing a loved one’s journey from this life to the next. Named “the father of the near-death experience” by the New York Times,

Raymond Moody, M.D., Ph.D. is the bestselling author of eleven books which have sold over 20 million copies. His seminal work, Life After Life, has completely changed the way we view death and dying and has sold over 13 million copies worldwide. Dr. Moody is the leading authority on the “near-death experience”—a phrase he coined in the late seventies. He is best known for his ground breaking work on the near-death experience and what happens when we die. The New York Times calls Dr. Moody “the father of the near-death experience.” He has enlightened and entertained audiences all over the world for over three decades, lecturing on such topics as: Near Death Experiences, Life After Loss, Surviving Grief & Finding Hope, Reunions: Visionary Encounters With Departed Loved Ones, and
Catastrophic Tragedies & Events causing collective grief response.

In addition to his writing and lecturing, he is in the private practice of philosophical counseling and consulting on dying. Dr. Moody also trains hospice workers, clergy, psychologists, nurses, doctors, and other medical professionals on matters of grief recovery and dying. He
helps people to identify systems of support and to cope with their anxiety, grief, and loss through better understanding of mourning and
bereavement. Dr. Moody received his medical degree from the College of Georgia and his Ph.D. in philosophy from the University of Virginia where he also received his M.A. and B.A. He is the recipient of many awards including the World Humanitarian Award and a bronze medal in the Human Relations category at the New York Film Festival for the movie version of Life After Life. Dr. Moody is also a frequent media guest and has appeared on The Oprah Winfrey Show three times, as well as on hundreds of other local and nationally syndicated programs such as MSNBC: Grief Recovery, Today, ABC’s Turning Point, and hundreds more.

Paul Perry is the co-author of four New York Times bestsellers, including Saved by the Light (which was made into a popular movie) and Evidence of the Afterlife. He has co-authored five books with Dr. Raymond Moody. Their books have been published in more than 30 languages around the world. Paul is also a documentary filmmaker whose work has appeared on worldwide television. His best known film, Jesus, the Lost Years was first the subject of a book he wrote for Random House, which follows the trail believed to be taken by the Holy Family as they fled into Egypt to escape the murderous soldiers of King Herod. He has produced and directed several other films, including one on 18th Century piracy in Madagascar that aired on the History Channel.

His documentary, Afterlife, explores mankind’s most nagging question, What happens when we die? This and other questions about the Afterlife are scientifically explored through modern research into near-death experiences. Through interviews with noted researchers Raymond Moody, MD, PhD, and Jeffrey Long, MD, this documentary explores the evidence of the afterlife using insightful interviews with
researchers, emotional case studies, and crisply done recreations.