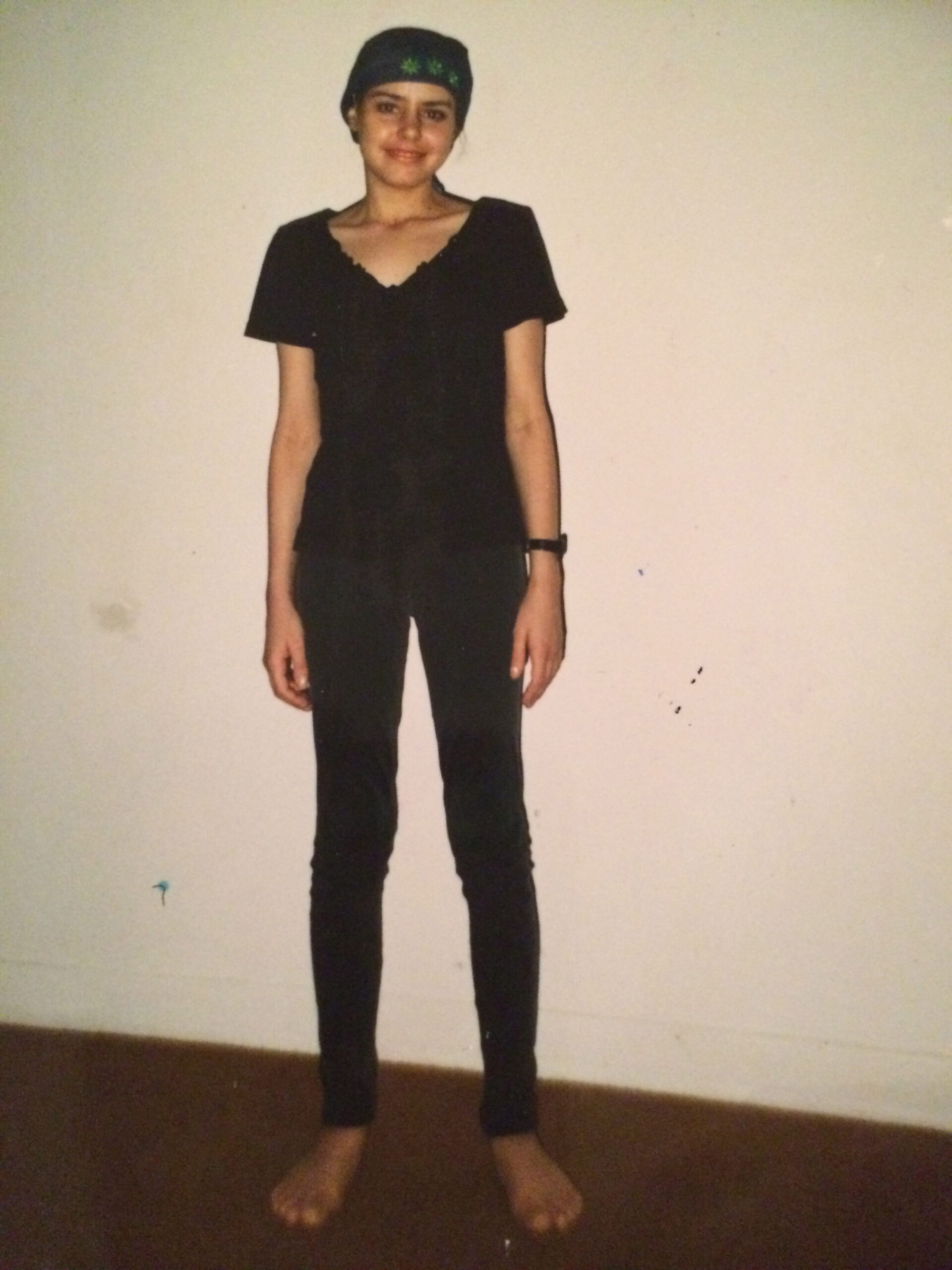 Me in 1997, Cape Town after an extended illness.

The above picture was taken in 1997 after a serious illness. I was going about life as normal. Having taken a job with Air France, I was sent to Paris for two week’s of training and got a chest infection while I was there. A day after returning to Cape Town (I was living in South African back then) I started throwing up and feeling really ill. At first I thought I must have eaten something contaminated and assumed it was a bad case of food poisoning.

I remember that I was throwing up so often that even whilst waiting in my Doctor’s waiting room, I had to make a trip to the bathroom. My doctor referred me on to a specialist and, at this stage,I still wasn’t overly concerned. It was during my appointment with the Specialist that I first became aware that I could be afflicted with something more serious. She looked at my boyfriend and said that I would need to be admitted for tests and could he bring me provisions for my stay?

I was transferred from that hospital to another one in an ambulance and from that point onwards, things become a little blurry. After numerous blood tests, they confirmed that I had a rare blood disorder called Thrombotic Thrombocytopenic Purpura (TTP). They started blood plasma transfusions to try clean my infected blood. After one of these transfusions that lasted several hours, I was returned to my room and I remember thinking that one of the nurses was trying to poison me. I felt really afraid of her. I found out later on that this blood disorder can lead to mental confusion.

The next day at 5am, I phoned my boyfriend whom had recently collected my mother from the airport (she had flown two hours from Johannesburg to see me) and asked them to please come as I felt odd and unwell. A few minutes after they arrived, I had a seizure in the middle of drinking a cup of tea. I remember feeling jerking movements in my hands and arm, involuntarily chucking my cup of tea and trying to get words out my mouth to ask what was happening.

The worst thing that my boyfriend and my mum, not wanting to alarm me, didn’t acknowledge that anything was happening. My boyfriend abruptly left the room to find a nurse. MRI scans followed and I was placed on epilepsy drugs. They never did find the reason for the seizure.

I went through chemotherapy (a common treatment for TTP) and got pneumonia. One thing led to another and I became so ill that I was placed on a ventilator and put in intensive care. It was touch and go for a while as my kidneys failed too. I also lost my hair which I found very hard but by that stage your sphere of priorities does decrease.

I remember being obsessed about just being allowed a drink of juice. That would become my focus and I’d think about it all day. I was allowed very little to drink and felt constantly thirsty.

Thankfully my lung doctor managed to obtain a drug from the USA that hadn’t yet been approved in South Africa. This drug saved my life. I had a wonderful team of doctors and after 6 weeks I began to get better. I’d lost 10 kilograms and when I left hospital I weighed a mere 38 kgs (5.98 stones).

At the end, my muscles had atrophied so much that I could hardly stand on my own. It’s amazing how quickly your muscles lose their power when you don’t use them.

The above photo was taken a month or two after I came out of hospital. It almost seems like a bad dream now, like it was a movie I watched.

The moral of the story is to enjoy every moment as you never know what might happen in the near future. Hopefully all will be well but complacency and an entitled approach to many years ahead can be misguided.

I see so many clients who have a poor quality of life and who console themselves by thinking that their misery right now will be worth it in the long run. It can be false thinking..try to have a quality of  life in the present moment too…each moment is important. Mindfulness, living in the moment and expressing gratitude are great ways to begin.