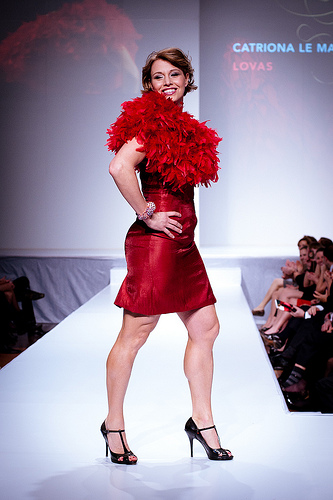 It’s a joke –  designers filling their bank accounts at the expense of the insecure masses. Yes – wear this brand and you’re a ‘somebody’. That’s the dubious message they send out in their multi-million dollar marketing campaigns and we all buy into it. What a load of rubbish! Just a  form of daylight robbery if you ask me…
People who have self-confidence and like themselves are just as happy in nondesigner clothing. Why? Because they have nothing to prove. They know themselves, have conviction in who they are and buy according to what looks good on them. They impress themselves, not others.

The irony is this – I used to work with people who stole, who had nothing, who were seen as outcasts and rejects yet most of them somehow afforded designer goods. No doubt these were counterfeit but the incongruity wasn’t lost on me.

Designer goods do not make you a better person or a worse person. They do the job of covering up your naughty bits so that you don’t get arrested, just at a higher price.

I have bought designer goods and have found on numerous occasions that they cheap equivalents have lasted longer! Sure, designer stuff can be superior in quality but the cost is completely disproportionate to the difference in quality.

There’s nothing wrong with buying designer goods. It’s a free world but for goodness sake, don’t buy it in the hopes that it improves who you are as a person. Not wearing designer clothing doesn’t make you less worthy either.  If you’re a mean lout, you will still be a mean lout, but in expensive clothing.

Whenever I see someone head to toe in designer, I tend to think they must be really insecure…
Like and love yourself, define yourself by developing your own style. Don’t buy into the hype of designer nonsense. Stand apart…impress yourself.