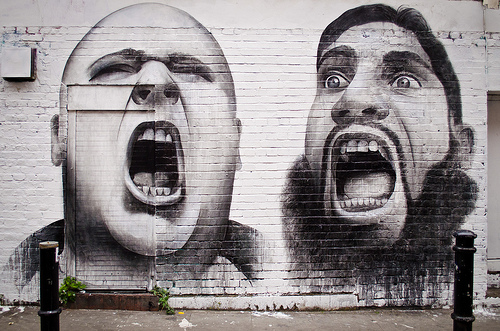 1) Don’t buy into the image

Dealing with intimidating people involves keeping a clear head about their intimidating behaviour. Many people with intimidating behaviour have learned to use this to keep others at bay. It is often a defense mechanism which helps them avoid having to form closer relationships. This way they feel safe from rejection and if people don’t warm to them they feel okay about it as they have controlled that situation by being intimidating. One of their biggest fears is to be kind and nice and still be rejected. Being intimidating means that they have chosen to keep others at bay and give off an impression of not caring about what others think. The truth is that they often care deeply about what others think. So don’t buy into the image of intimidation – it’d not what is going on underneath for them- the part you don’t see, they part they hide.

2) Acting intimidating is a form of avoidance

Intimidating people use this behaviour to avoid others getting too close. It is far easier to avoid what you fear than to invite it in and possibly lose control. This idea is far too scary to contemplate.

3) See beneath the exterior

When you stop seeing the intimidating person as someone who might bite your head off and start seeing them as someone who probably has issues with intimacy and personal relationships, it becomes easier to put their behaviour into context. Ignore their off putting behaviour and act as if you haven’t noticed it. Appear calm and unaffected. This is the first secret in getting through to intimidating. By appearing unphased, you will begin the ruffle their carefully crafted exterior and make them more amenable to communicating on a less intimidating level. They observe that you are not intimidated and thereby lose their power to ‘keep you at bay’. This is psychology at work. I have worked with intimidating clients and have never allowed them to witness any anxiety on my part. That is what they hope for, that is what they expect. Throw them off guard and this opens the way for a more effective style of communication.

4) Intimidating people expect to intimidate others

When you show them that you are unaffected, intimidating people immediately lose their power.

5) Visualise the vulnerable person beneath the gruff exterior

Everyone designs how they wish to come across but beneath that we all have vulnerabilities, insecurities and self doubt and this is no different for people with intimidating behaviour. When dealing with intimidating people, it is important to remember that they have a vulnerable side too. Try to appeal that part of them rather than reacting to the bear-with-a-sore-head character that they prefer to project.

I have even visualised high powered clients who hide behind their corporate identities in vulnerable, human situations such as – on the loo. I know – unconventional but it works. Bringing intimidating people back into the realm of where I am rather than seeing them in an unrealistic light -not  buying into the image they have created is the key to dealing with intimidating people. You do not have to accept them at face value as they would want you to.

Intimidating people are good at keeping others at bay by being frosty and seeming ‘hard’. This is very rarely who they really are. If you can keep this thought in focus you will never be intimidated again.